NOTE: A detailed collection of articles on air quality can be found on the AIR page. 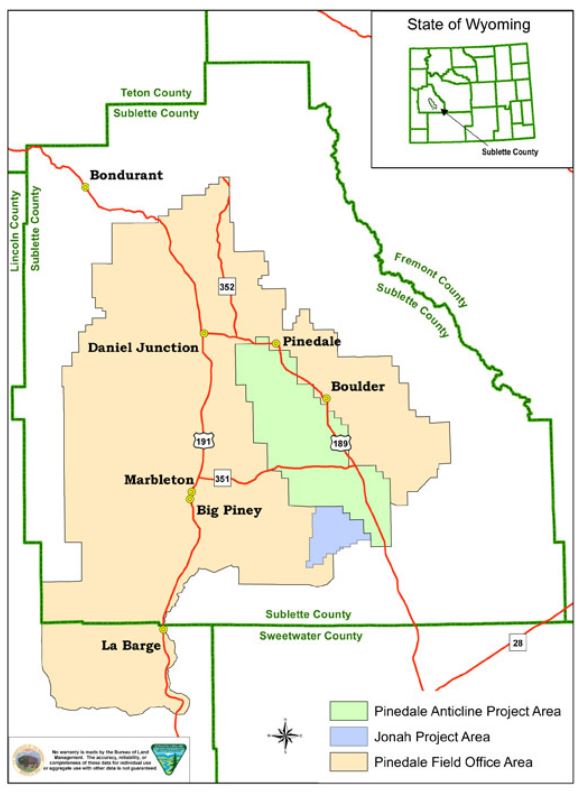 Sublette County experienced a dramatic natural gas boom beginning around 2000. Fracking technologies opened up drilling in the Jonah Field and the Pinedale Anticline. These fields became a very significant gas discovery, even on a national level. During boom years, the area experienced drilling, fracking, heavy truck traffic and other activities that created the ozone issue we struggle with.

As a result of this development, those living in Wyoming’s rural UGRB have recently suffered episodes of some of the nation’s highest ozone levels. In spite of an economic downturn in 2008, natural gas extraction from the Jonah Field and the Pinedale Anticline continues.  Elevated pollution still causes ozone alerts.

In September of 2011, CURED and other citizens demanded that the Environmental Protection Agency (EPA) act immediately in confronting the unhealthy ground-level ozone pollution that resulted from an extraordinary rise in oil-and-gas activity within the state’s Upper Green River Basin UGRB.

CURED served the EPA notice that it would file a lawsuit in sixty days unless the UGRB became designated as not meeting national ozone standards. Such a designation was needed to trigger protections under the Clean Air Act. The EPA agreed that the UGRB was not meeting national air quality standards, and designated it as a “non-attainment” region. This prompted the Wyoming DEQ to create and enforce better practices for oil and gas development. A task force was created which included residents, CURED members, a WOC member, industry representatives, and other local officials to generate recommendations for reducing emissions. These can be seen in detail here

As of April, 2019, we are still in marginal non attainment with the 2008 STANDARD of 75 ppb, per the Clean Air Act. The winter of 2016-2017 experienced high ozone spikes. A public meeting hosted by Sublette County Commissioners was held in Pinedale, Wyoming. Air Quality Division employees traveled to Pinedale on in March of 2017, to discuss the 2017 ozone season. Results of this meeting were disappointing. Soon after this meeting,  DEQ Air Quality staff testified before the US House of representatives on H.R 806, Ozone Standards Implementation Act of 2017. Wild fires, internationally transported ozone, trans-Pacific pollution, stratospheric intrusion and other sources were blamed for ozone spikes. Read the Ozone Standards Implementation Act of 2017

CURED members hope that factors such as snow-pack and local emissions are still considered a large piece of the puzzle of ground level ozone pollution. We intend to continue following the science, and working with the DEQ to resolve air quality issues.

Snow pack and conditions were unfortunately favorable for ozone spikes in the winter of 2019. See our tab under AIR to read more.