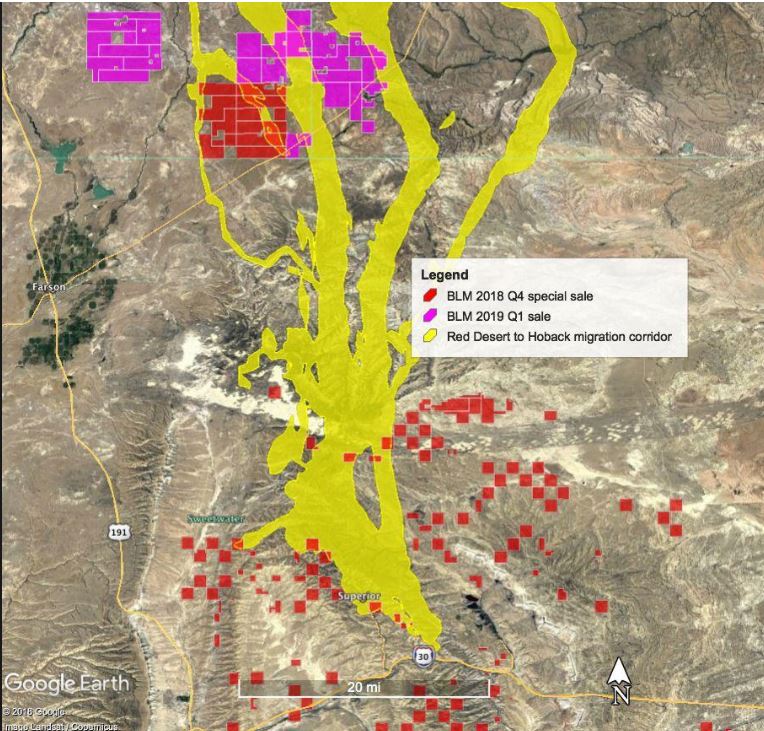 Parcels in red were auctioned by the BLM early in March, 2019. Leases slated for sale in March are marked in pink. The mule deer migration corridor is shown in yellow. THEODORE ROOSEVELT CONSERVATION PARTNERSHIP

The BLM offered 144 oil and gas lease parcels totaling about 158,048 acres at its March 2019 quarterly lease sale. These parcels are located across the state, within every BLM Wyoming field office (excluding Cody) 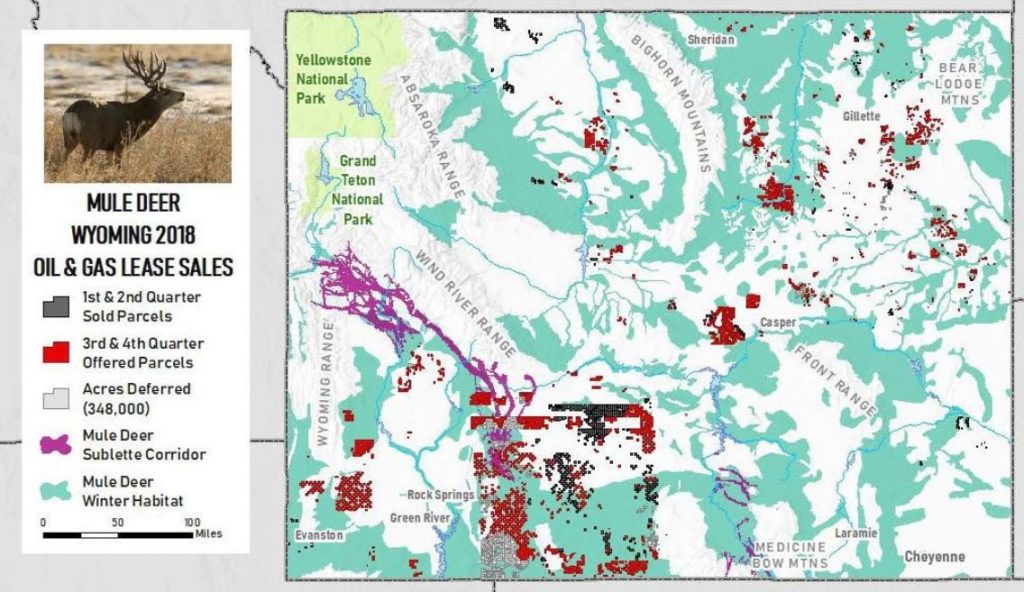 An editorial by Elaine Crumpley, November 16, 2018, published in the Pinedale Roundup

As a retired Sublette County science teacher and 38 year resident, I am writing in regard to the Bureau of Land Management’s December (but now postponed until February) oil and gas lease parcels, as well as the planned 2019 leases that are overlapping into our Red Desert to Hoback  Mule Deer Corridor or critical winter range habitat.

Ungulate migration corridors are all about connectivity between summer and winter ranges.  Well-field development seriously disrupts the animals’ ability to access these ranges. Migration doesn’t occur whimsically; rather it is intrinsically timed with peak seasonal food availability. The migration routes and pastures along it are critical for Mule Deer survival.  Scientific research has documented that during the semi-annual migrations, the Sublette Mule Deer Herd spend 95% of their time foraging and resting in these stopovers and only 5% of the time traveling.

Ungulate migration is a honed, ecological, memory-based behavior that allows these animals to balance nutritional intake with the energy expenditures of undertaking this long, 150 mile journey.  Mule deer are unique in that they have a common thread of animal fidelity to route and range, referred to as a “migration memory.” The idea that mule deer will simply find an alternative route, or go around another way is gravely incorrect.  The loss of this memory is a loss to future generations of mule deer. The benefit from migration requires these deer to graze and browse specific areas at specific times, especially in the spring when their condition is most run down, the does are heavily pregnant, and new plant growth is the most nutritious.  If mule deer are forced away from their traditional routes or have to move through an area more quickly they lose out on essential forage and subsequently lose the benefit of migration.

Choosing to allow natural gas development in these areas is only adding more barriers in an already difficult plight for the mule deer.  Roads, housing developments, bottlenecks, harsh weather conditions, and hunting all play a key role in predicting the future for these migrating herds.  Scientists admit that they do not know the breaking point that will finally stop the deer’s culturally learned migration corridor.

The BLM’s lease parcels that overlap the corridor or winter range are not vital to our state’s energy industry.  The Red Desert to Hoback parcels sold in September brought a mere $50,000 for the state.  Approximately 5,000 deer use this corridor, so that’s less than $10.00 per deer.  The Wyoming Game and Fish have estimated the value of a single deer at $3,000 – and deer hunting in Sublette County alone brought in $4.6 million in 2015 revenues.

So what’s the best answer to this situation?  We need a science-based solution that will provide protection for the mule deer.  “Lease Notices” that are attached to these parcels right now do not provide a certainty that natural gas companies will avoid or “minimize” development in these areas.  It is only a lick and a promise that they will adhere to that notice. We need to put a NO SURFACE OCCUPANCY stipulation on each of these parcels to legally guarantee that natural gas development and its infrastructure will not be placed within winter range or migration corridors. Please do the right thing now.

An editorial by Jana Weber, November 16, 2018 , published in the Pinedale Roundup

On Saturday, Nov. 3, Sublette BOCES sponsored a presentation and book signing for Wild Migrations, Atlas of Wyoming’s Ungulates.  This book is an impressive body of research that answers questions about the species that migrate from the Red Desert to Yellowstone.

I find it very ironic that just as these scientists have documented the cultural habits of the Sublette mule deer herd, and exact maps of the migration of mule deer, antelope, elk, and moose, the state of Wyoming and the federal government have opened 68 proposed oil and gas leases which overlap with corridors or winter range.

If ever there was an opportunity to use the amazing technology and resources to protect these vital animals’ wellbeing, it is now.  The research is done.  The maps are made.  It is simply up to the state and federal agencies to use these maps to defer leases that will totally disrupt the migration or designate parts of leases as off limits if the migration corridor passes through them.

One thing that these scientists and cartographers did establish is that these animals take exactly the same route year after year.  Their migration and grazing are going to be severely compromised if that route is blocked by fences, roads, and industrial structures.

We need to let the BLM and the Wyoming Game and Fish know that we care about these animals and expect more from their stewardship.